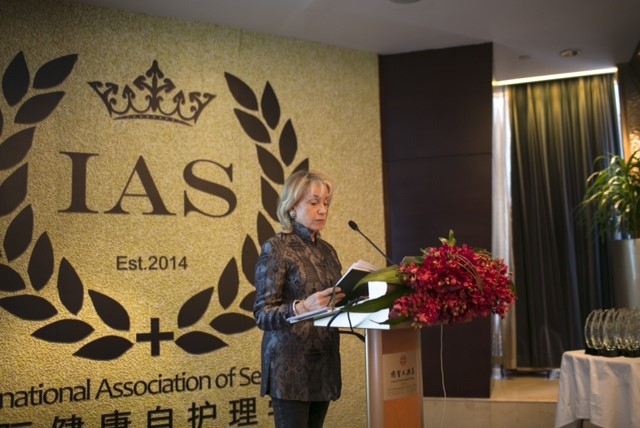 On a sunny summer’s day in London a couple of years ago, sitting on a bench in the Chelsea Physic Garden, known for its rare medicinal plants, I was having a great conversation with Ren about starting a higher Aromatherapy education school in China. Ren had a vision, enthusiasm and knowledge which one needs to start a new venture! Today it has become a reality.

Sue Mousley, a mutual friend, introduced us a few years ago at a conference in Taiwan where I was lecturing.

That’s why today I am in Beijing at this conference to support Ren. She has worked very hard with her team to get here and I wish her all the success she deserves.

Aromatherapy and Aromacology have been my ‘raison d’être’ for over 40 years and my work started the moment when I met the legendary Marguerite Maury, when very young in Paris .

It is at this time that my story and passion for Aromatherapy started. I became Marguerite Maury’s protégée and her ‘spiritual child’, as she liked to call me. I have carried on her work and research since her sudden death in September 1968.

She developed a great reputation for her ‘medico-cosmetic’ therapy, and was a firm believer in rejuvenation of the skin through essential oils. She won many prizes in the cosmetic industry for her research.

After her death, I started to research into the sense of smell: Osmology. A few years later at the end of the 70‘s, I coined the word Aromacology and obtained the trade mark. Now the word is widely used. I wanted to differentiate the meaning of the two words: Aromacology and Aromatherapy.

Let’s talk about Aromacology to start with as some of you have just come across the word or only have a little knowledge of it.

We tend to take our sense of smell for granted, always more aware of the apparently more significant senses of sight and hearing.

We have a nose for things! We sniff out problems and follow our noses.

We can diagnose disease, detect danger and distinguish between good and bad food just with our noses.

We pity those who cannot see or hear, but do we ever stop to consider how equally devastating it is to be unable to smell?

We humans are remarkably good at detecting, recognising and remembering odours.

We can identify our relatives by smell alone!

The sense of smell is a very emotive sense, ingrained in us, in our pleasures like mating and sexual desires – and in our warning systems like being alerted to a gas ring inadvertently left on?

Or having an appetite for a certain dish, because the right smells activate our digestive juices and make us hungry!

The nerves, stimulated by smell, send messages to one of the oldest and most primitive parts of our brain, the limbic system, which is why it is so integral to our lives.

Our sense of smell which is part of Aromacology is one of the subtlest means of communication we possess, and indeed one of the earliest means by which we form a bond with our new world. The sense of smell is the only sense with taste to mark the start of our life.

When a baby is born, the first thing it does is take a deep breath, inhaling the different odours in the air and meeting with its new world.

We breathe approximately 23000 breaths per day to stay alive and every time we breathe we inhale different molecules of different odours. Those molecules have a very important role to play in our health and nervous system and they send different commands to it, for instance:

We can smell and breathe or inhale essential oils.

Some examples of essential oils that help us:

To Sleep – Lavender or Petit Grain

To Be Active – Rosemary or Geranium, on the other hand, make us more active more energetic, like a good cup of coffee does

To Relax – Neroli and Rose

To Protect – We can ‘protect ourselves’ with Tea Tree and Ravensare because of their valuable natural antiseptic, antibiotic properties.

Aromatherapy
Recently I spent an instructive day wandering around the famous Harrods department store in London, asking people in the Beauty section to explain Aromatherapy to me.

Responses ranged from “something in your bath to relax you” to “a nice smelling candle.”

A consultant took me to the ‘Alternative Treatments’ section and left me to browse amongst Evening Primrose Oil and St John’s Wort for a while.

It seems strange that at a time when science is coming to appreciate more the benefits of Aromatherapy, the average person understands it less and less.

Even when Aromatherapy is explained, it’s seen as something directly opposed to conventional medicine and scientific opinion.

Aromatherapy is an ancient art making use of specially selected essential oils, extracted from plants.

Essential oils are made from a combination of different organic molecules, which gives each oil its unique character.

Recent scientific research and modern distillation methods have enabled a therapeutic system to be built up.

Each essential oil can be used to treat a wide range of ailments. Such oils are the quintessence of plants.

They have certain qualities which evolved in the plant to attract insects that promote fertilisation, to repel parasites and to catalyse biochemical reactions.

They could be considered to be types of vegetable hormones.

They have a biodynamic and ionising potential when used therapeutically to treat human ailments.

The origin of aromatherapy is lost in the mists of time when healers of antiquity practised their primitive natural medicine.

Often it takes science a while to explain why a plant works, when people have been using it for centuries.

For instance, the Aztecs prized Oil of Chia as a moisturiser so much that it was reserved only for the emperor alone. Recently, scientists discovered that it contains a high concentration of Omega-3 fatty acids, important in cell regeneration.

Essential oils are so important in rejuvenation of the skin
Being a practitioner for all these years, I have been able to give a totally different perspective when making skin care products and draw my ideas and solutions from practical experience of the problems encountered by my patients.

I firmly believe that everyone can have beautiful skin. I found in my research that essential oils encourage the production of skin cells, refining wrinkles and keeping a youthful appearance, slowing the ageing process.

There have been many years of research into the traditional uses of aromatic substances and in recent years modern technology has permitted research into new ingredients designed to help slow the ageing process, beautifying the skin.

Aromatherapy is all about the expert blending of oils
Part of ‘Médecine Douce.’ The pure and natural plant oils of aromatherapy can benefit health and beauty in many ways.
It is about plants and the power of natural ingredients. This has inspired and enthused me all my life.

It has, however, been seen as something directly opposed to conventional medicine and scientific opinion.

Medical opinion originally scoffed at the idea, but as aromatherapy gained in popularity, with too many success stories for it to be dismissed as a placebo effect, studies began to prove its claims.

Absorption of oils via the skin was also a subject of controversy for years, with clinical trials providing conflicting results as to the efficacy of topical application.

Yet I knew from childhood that a clove of garlic, crushed and placed under the foot, would make my breath smell garlicky just 30 minutes later. Now we understand better how it depends on the constituents and density of each essential oil, the carrier it is combined with and the body fat ratio of the person it is applied to.

What seems clear is that the principles by which aromatherapists work are now accepted. It’s now quite common for hospices and medical institutions, like the George Eliot Hospital where I am a Patron, to include aromatherapy as part of a range of patient treatments, massages, acupressure using different essential oils to be used in the Obstetric unit by midwives before and after babies are born.

Aromatherapy is not only my subject but it is my way of life and it has helped me in so many circumstances. It has given me the chance in a pleasant aromatic way to cope with and thrive in many difficult situations throughout my life.

It is a refreshingly simple approach, combining Eastern and Western traditions, and a commitment to the power of Nature.

Aromatherapeutic essential oils used for rejuvenation are very powerful and one of my latest books, ‘Secrets of Health and Beauty’, offers my personal secrets, including the know-how to slow down the ageing process using essential oils and other important natural ingredients.

Exciting discoveries await us in the future, as science explains effects that traditional usage and aromatherapists have long observed. In the meantime, the best advice is often common sense.

Think carefully about everything you put on or inside yourself – eat healthy, natural foods and look after your sense of smell by following your nose!

So that is why that I would like to encourage you to benefit from this wonderful therapy.

Aromatherapy has given me a chance to be with you today in Beijing.

By popular demand, Danièle Ryman has launched her 'expert series for wellbeing' eBooks, the first of which accompanies her bestselling Aromatherapy Bible